Bitcoin Gold: Will an Announced Breakthrough Become Another Dud?

The recent quakes of the bitcoin market produced a real hype among its influential players, investors, bankers, and enterprises. After the hard fork of Bitcoin Cash (BTC) and bitcoin price fluctuations, October-scheduled Bitcoin Gold fork was more than expected.

Get ready for a new leap - meet Bitcoin Gold

UPD, November 14th: As a result of another hard fork in the bitcoin network, a new cryptocurrency was anticipated to separate on the 25th of October and appear on the exchanges by the 1st of November. However, it was “officially” launched only on the 12th of November, after several warnings that developers call off plans to split the currency. Bitcoin Gold client is now available and public mining is accessible on several pools with a block 499407. Right before the fork, Bitcoin Gold reached the point of $500, as predicted in this post. In the last 24 hours, though, the price collapsed to $220. 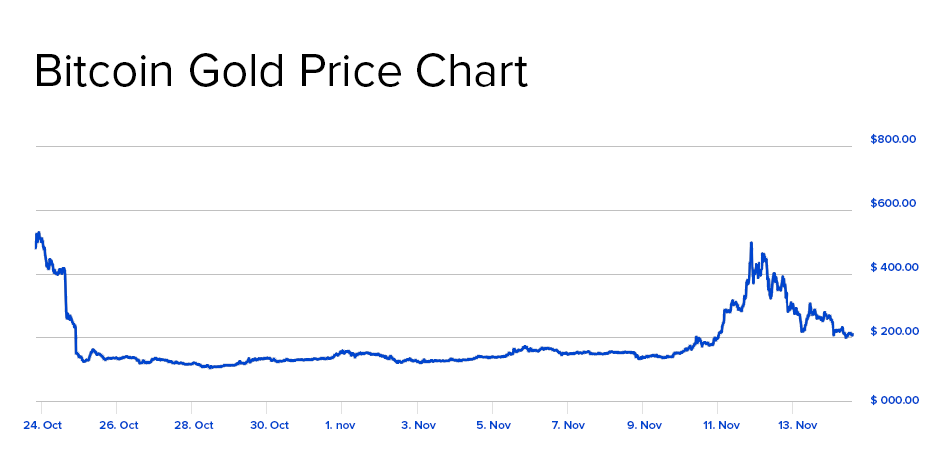 The Chinese project will adopt a new mechanism, designed to exploit the Equihash algorithm that Zcash uses, instead of bitcoin’s SHA256 algorithm. It is expected to make mining accessible to more people and reduce the share of influential players in this market, giving a start to a new gold rush, but the digital one.

Today, mining is not that open to anyone as it used to be, as the priority is consigned to expensive custom miners in giant companies to achieve economies of scale. Bitcoin Gold, on the contrary, attempts to decentralise bitcoins and add more democracy to mining for everyone who feels acquainted enough with the software on their PCs to hold all the aces instead of mining farms and pools.

Jack Liao believes that giant mining manipulators, like Bitmain, influence the bitcoin too much, establishing prices or fees and posing a threat to the network. Experts claim that the Bitcoin Cash hard fork was the intention of Jihan Wu, Bitmain’s leader to impair the bitcoin ecosystem and wrest out the lion's share of the digital currency with centralised mining. Liao’s move seems to be a reflection to the monopolisation of the market by Wu.

However, despite being one of the most influential companies in the bitcoin market, does Bitmain have enough power to manipulate it? Should we consider Bitcoin Gold being an attempt to liberate bitcoin assets and make them more accessible?

There is always someone interested behind a gesture of goodwill. At-home mining will attract a broader audience to Bitcoin Gold, raising its price and merely taking all the credit from the Bitcoin Cash. Quite a profitable move for Jack Liao, considering his Lightning ASIC business conveniently sells hardware that digital gold miners will require.

Another bubble that is going to pop?

Bitcoin Gold is somewhat obscure now, mostly because of the lack of technical information — the fork is meant to go live this month, while many project details are still unveiled. The official website didn’t look authoritative and credible enough, reporting only the start date of the upcoming bitcoin crack till this week. The BTG leading developer, with the alias ‘h4x’, is not that convincing either: according to him, many nuances, for example, block size, testnet and core protocol, are still being discussed.

The chances of the BTG network to replace Bitcoin in the marketplace are miserable, and the fork is unlikely to become a chain split. The BTC.Top and ViaBTC management, which played a vital role in the emergence of Bitcoin Cash, considers the new cryptocurrency to be unnecessary and meaningless. Indeed, the Bitcoin Cash experience shows that its network is much smaller in comparison to the original bitcoin network, and the cost is only 11% of the bitcoin price.

It is also alleged that the owners of Bitcoins will be able to receive the equivalent in Bitcoin Gold once the project kicks off. Finally, will the crypto gold be in demand? Will it repeat the index of the bitcash, which took a high start with $700 per unit?

"Prediction is very difficult, especially if it's about the future."- Nils Bohr

Immediately after launch, when the audience has a keen interest in it, we expect the price of the Bitcoin Gold to be at the point of $500. Gradually, as the excitement around the crypto newcomer will ease off, its exchange rate will begin to decrease slightly.

At the beginning of 2018, we will analyse Bitcoin Gold on its real merits: how secure will this currency be? Considering the project’s rapid uprise, it is unlikely to be tested well - some critical bugs or vulnerabilities can come out upon release.

If you’re interested in adopting crypto currencies for your organisation, contact us! Get ELEKS’ expert support in enforcing the efficiency of cryptocurrency and Blockchain for your business.